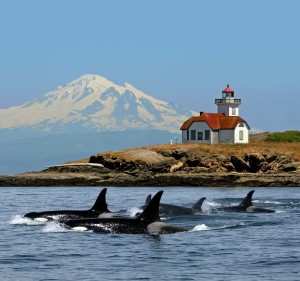 There are plenty of events happening in Seattle over Memorial Day weekend (May 26-29), including the 2017 Chittenden Locks Summer Concert Series, Northwest Folklife, and the Seattle International Film Festival 2017. But if you want to get out of town for your three-day weekend, we’ve compiled this list of festivals happening in cities ranging from Portland to Vancouver for inspiration. From art to music to shrimp eating to seagull calling, there’s probably something for you!

Vancouver, B.C.
Art! Vancouver 2017
Vancouver, B.C. hosts this international fine arts fair on its beautiful waterfront. Canadian gallerists and exhibitors from all over the world will make a temporary home for works of arts plastiques—sculpture, painting, calligraphy, and more. Many guest speakers will attend, and on Thursday night, they’ll hold a party with a special arts catwalk showcase. See live painting for the entire weekend as well.
($18.50-$109 CAD admission, 143 miles north)

George
Sasquatch! Music Festival
Lose yourself in Central Washington for three straight days of sweat, chili fries, and enough live music to last you the summer. The announced headliners include LCD Soundsystem, Twenty One Pilots, and Chance The Rapper, with support acts from Sleigh Bells, Benjamin Clementine, Kaytranada, The Head & The Heart, and more. Tickets are still available for the festival and for camping.
($99.50-$295 admission, 150 miles east)

Portland, OR
CityFair: Portland Rose Festival
Portland will live up to its botanic nickname during three weekends of fried food, music, and carnival games, including a human catapult known as the Big Sling. Plus: a live exotic mammal showcase with everything from tigers to spiders. Opening night activities on Friday, May 26, include a fireworks display and a dance party in the “RoZone.”
($8 admission, 174 miles south)

Bremerton
Kitsap Harbor Festival
Soon the boats will be launching, and the Port of Bremerton will kick off the season with concerts and performances plus barbecue and more boardwalk fun. Plus, head over to Port Orchard for the truly strange Seagull Calling Festival and Wing Cook-Off.
(65 miles west)

Brinnon
Brinnon Shrimpfest
Strike out for the gorgeous Hood Canal, where vendors, musicians, artists, and harvesters of sea delectables will gather to kick up their heels. There will be local music, belt sander racers, cool stuff to buy, and seafood.
($5 admission, 58 miles northwest)

Burnaby, B.C. (Outside of Vancouver)
European Festival
For the 20th year, the British Columbian city of Burnaby (just outside of Vancouver) will throw a big party of European culture. Hear artists, buy street fair goods, see cultural exhibitions, eat traditional food, hang out in the beer garden, and fling yourself into a massive Eurodance party (Saturday) as you celebrate countries from Albania to Ukraine. This year’s featured country is Finland, so shout “Hurraa Suomi!”
($8/$10 CAD admission, 136 miles north)

Willamette Valley, OR
Memorial Weekend in the Wine Country
Drop in on some of the 150-odd wineries that will open their doors for Oregon Wine Month. Tour vineyards, sip new vintages, and picnic on the grass as you discover vintners who rarely welcome the public and learn about the region that was named 2016 Wine Region of the Year by Wine Enthusiast.
(222 miles south)

Vancouver, B.C.
Vancouver International Children’s Festival
On Memorial Day weekend (you have the Monday off, but Canadians don’t!), take your kids to an island full of activities and performances for this 40th annual festival. Events include Pajama Nights, the Birthday Party with cake, song, and dancing, the amazing Afrique en Cirque circus company, The Canada Show recounting 50,000 years of Canada, eh, and much more.
($25.10/$15.13 CAD admission, 142 miles north)